“WuHawk visited campus one day last fall. He swooped down and killed a cottontail right in front of Neff Hall.

He proceeded to eat his lunch in front of a crowd of students for over an hour. Too bad neither KU nor K-State has a rabbit mascot. At any rate, WuHawk is real, unlike that mythical bird that hangs out in Lawrence!”

— WSU anthropology professor Don Blakeslee, who snapped this photo of WuHawk on the day of his campus appearance, Oct. 22, 2007.

“Google ‘WSU’ and the first site that comes up is, alas, Washington State. Wichita State is second, Wayne State on down the page, Wright State right behind.”

“Thanks for educating my mom.”

— Ron Shelor of Topeka, Kan., in a letter notifying the WSU Alumni Association of the death of his mother, Ethelyn (Butler) Shelor ’34. (Please see In Memoriam.) 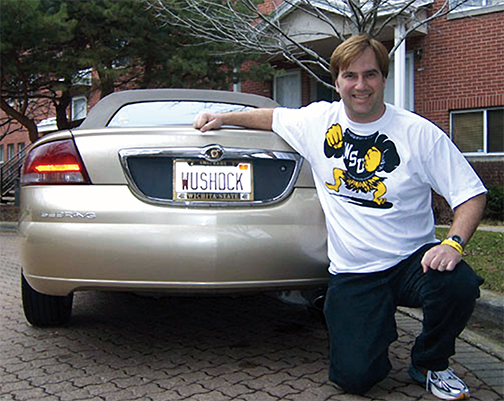 Shockers in Kansas are familiar with the WuShock state tags — what with the success of the Kansas License Plate Scholarship program, which to date has pumped more than $280,000 into scholarships for deserving students at Wichita State. But what about loyal Shockers who hail from out of state?

As one striking example, folks in Indiana are greeted to a slice of WSU pride when they spot Elliott Sienicki’s 1998 Jeep with its SHOCKU tag.

Sienicki, a forensic science and criminal justice major at Wichita State, at first had to explain the tag’s meaning to citizens of the Hoosier state.

“Now they get it and know what a Shocker is,” he says. Sienicki plans to stay and work in the Wichita area after graduation.